Arun District Council saw a change in administration at the Annual Meeting on Wednesday 22 May 2019.

The meeting started with Former Chairman Alan Gammon (Con) handing over the civic reins to Cllr Mrs Jeannette Warr (Lib Dem) who will be Chairman for the Civic year 2019-2020. 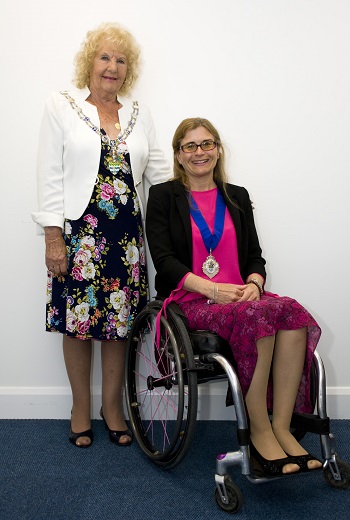 Cllr Mrs Warr thanked Chairman Gammon for his service and also paid tribute to councillors who had either chosen not to stand or had not been successful in the recent elections.

Looking forward to the future, the new Chairman welcomed all the new Councillors and those that has been elected for a further term and said she was looking forward to chairing fair and respectful meetings.  Cllr Mrs Warr will be supporting the Arun District Council staff fundraising work throughout her year and is looking forward to working closely with officers.

The Vice Chairman role has been filled by Cllr Mrs Amanda Worne (Lib Dem), ward councillor for Yapton and a new member of the Council.  Mrs Worne is delighted to have been taken on the role of support to the Chairman and is looking forward to representing Arun District Council and raising awareness of disability and diversity in the district.

The Council, now made up of 22 Liberal Democrats, 21 Conservatives, 8 Independents, 2 Green and 1 Labour member, is the most diverse council Arun has ever seen. The council is made up of more young members, with Henry Jones (Lib Dem - Yapton ward) the youngest ever Arun District Councillor at the age of 20. The Council also has three members with disabilities and a same-sex married couple.

Speaking at the meeting, Cllr Dr Walsh, newly elected Leader of the Council said: “The residents of Arun District have for the first time ever voted for an alternative administration, with only 35% voting Conservative, and 48% for the Liberal Democrat, Independents and Greens, with 13% for Labour.

“I intend to make this council much more open, transparent and genuinely consultative with all our residents. To that end we are going to webcast all full Council Meetings and as many committees as we can.

“I intend to scrap the Cabinet system, where seven members all from one party, take all executive decisions, and return to a proportional committee system where all members participate and take the decisions.

“I want to see if we can increase the projected 250 new council houses for rent to in the region of 500 over 10 years, so that more of our local people can get decent housing, and crucially to have a real look at developments in the district to make sure we put infrastructure ahead of new housing, everywhere in the district.

"I intend, through working with others, including the Police and Crime Commissioner and Chief Constable, to improve our very none-existent town centre policing and to return the streets to our retailers, residents and visitors.”

"With support from our Independent and Green colleagues, we intend to deliver change in Arun district for the benefit of all our residents."